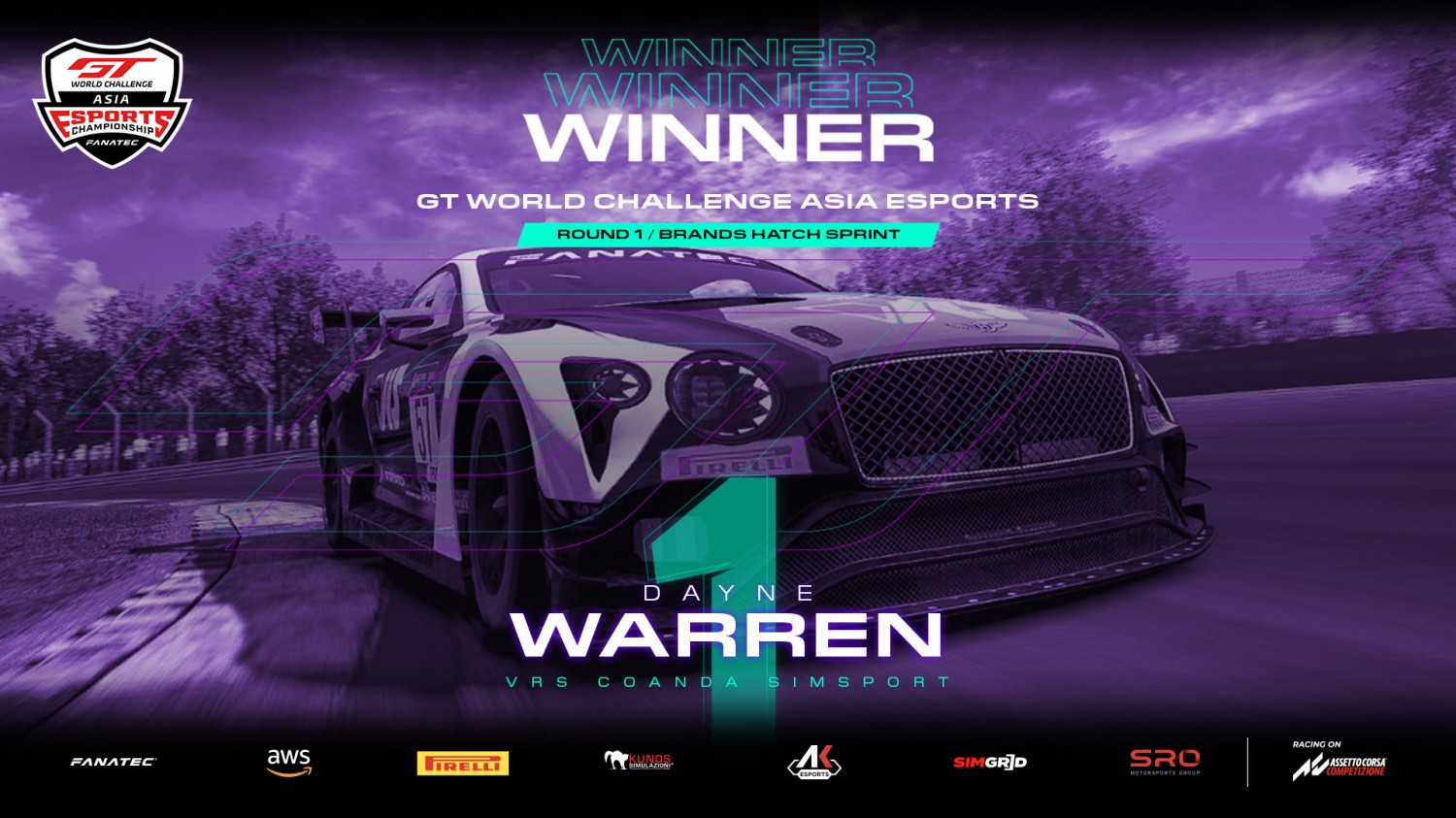 The Bentley driver was a class apart throughout the hour-long race after topping qualifying by three tenths. Reigning champion Andika Rama Maulana valiantly gave chase but ended the 60-minute contest fighting a rear-guard action against another Bentley driven by JMX Phantom’s Fadhli Rachmat who rapidly closed down the Legion of Racers Ferrari after dispatching Dillan Tan.

KuiSheng Huang completed the top-five and list of automatic invitees for the second Sprint round at Zandvoort next month where, on this evidence at least, Warren will be tough to beat.

The Australian never looked back after converting his significant qualifying advantage into the lead at Turn 1. Indeed, aside from the pitstop sequence, his Bentley led every lap of the hour-long race.

That was partly thanks to a storming first stint in which he amassed an eight-second lead over Maulana. Adding more fuel than necessary and switching off the ignition meant that advantage dropped to three seconds by the time the window closed after 35 minutes, but that was more than sufficient to keep clear of the pursuing Ferrari which had moved from third to second on lap one.

Maulana’s deteriorating tyres and the defensive driving required to keep Rachmat’s charging Bentley at bay belied the final 2.3s gap between the top-two.

Rachmat started fourth and dropped to fifth early on but reclaimed his grid position with a well-executed move around the outside of Tan at Stirlings before the pitstops began. Somehow, Legion of Racers’ second Ferrari emerged ahead before Rachmat re-claimed the place with another opportunistic pass amongst traffic. He was almost alongside Maulana when the chequered flag fell.

Tan followed them home half-a-second back – a reasonable reward after starting second but pitting in fifth. Both his and Rachmat’s final positions owed something to Huang’s slower pitstop, which dropped the Full Pace Racing Ferrari outside of the podium places. Four seconds covered the top-five who all earned an automatic Round 2 entry for their efforts.

Ferrari and Bentley’s top-six stranglehold was completed by Inspeed Racing’s Jiacheng Jiang who finished where he started, albeit 23s behind Warren’s winning Continental.

The majority of the other points scorers made significant progress from their qualifying positions.

Damon Woods’ Gen-Z Racing Mercedes-AMG was the first car home without a Bentley badge, a feat all the more impressive given it started 15th.

Kelvin Chen (Full Pace Racing, Porsche) gained a rather more modest one place, but the same couldn’t be said for either Ryan Duong (Roadblock, Lexus) or Thanathip Thanalapanan (Vattana Motorsport, McLaren) who climbed from 20th and 26th respectively. The latter came under intense pressure from Mia Rose (Jean Alesi Esports Academy, Honda) towards the finish before her chances of points faded with a five-second penalty.

Watch them all live on SRO’s YouTube and Twitch channels.