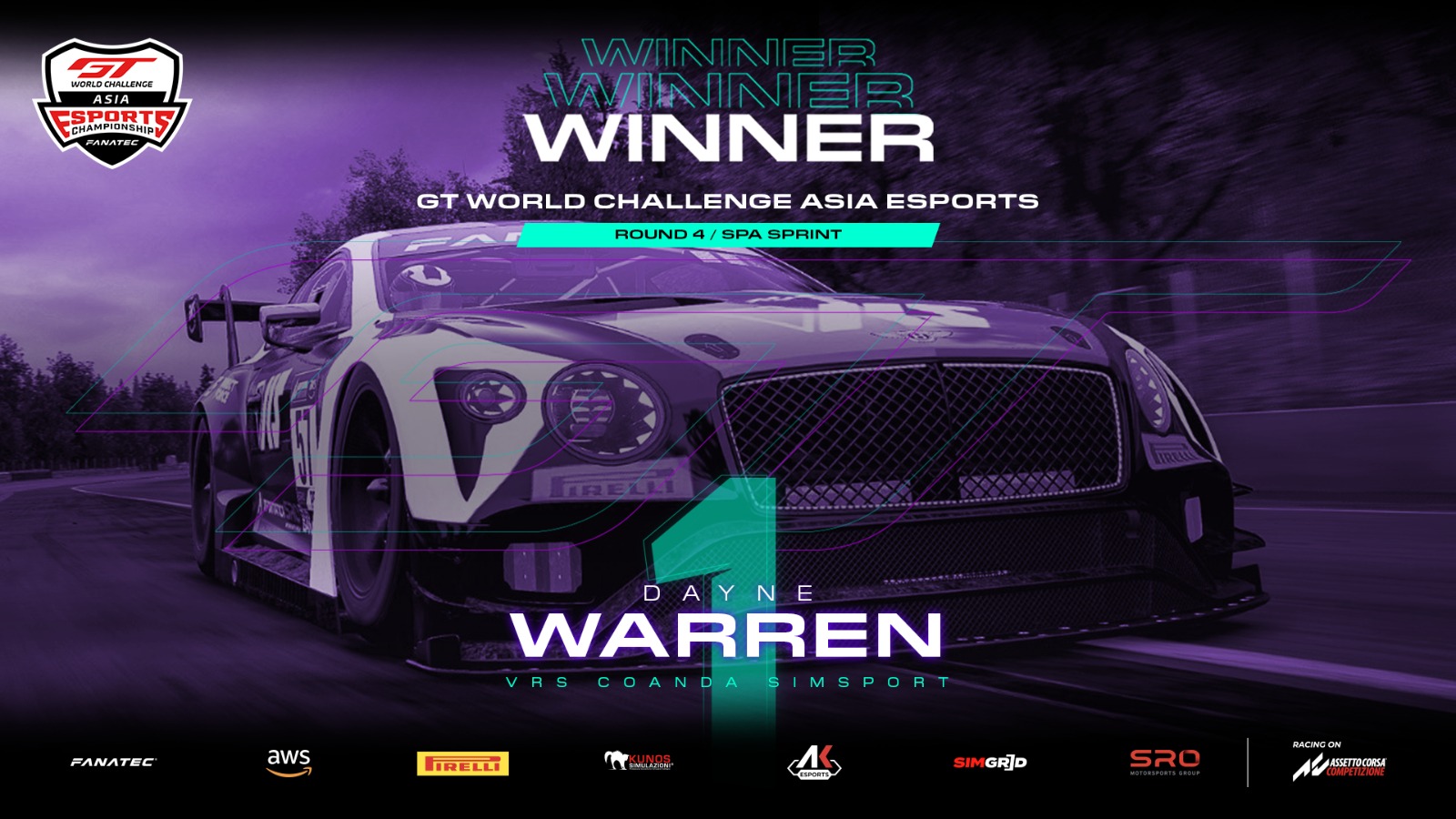 Dayne Warren has wrapped up the GT World Challenge Asia Esports Sprint Series title with a round to spare at Spa-Francorchamps after maintaining his and VRS Coanda Simsport's 100% winning record.

The Bentley was never seriously challenged after scoring its third pole position of the year, and also claimed fastest lap – its fourth of the campaign – en route to a commanding 18s victory over Legion of Racers’ Ferrari driven by Dillan Tan.

Such were the championship permutations that Dayne Warren was always likely to seal the crown at Spa, regardless of whether he won or not.

But after dominating this year’s first three races the Australian was in no mood to coast towards the title. Instead, a 0.2s qualifying advantage quickly turned into another esports exhibition at the front of a 42-strong field.

The run towards Eau Rouge was as close as fellow front row starter Dillan Tan would come to challenging the Bentley, which began to edge clear while the Legion of Racers Ferrari initially fought Philippa Boquida’s McLaren.

The latter’s early retirement provided some respite but made no difference to Tan’s pursuit of Warren who pitted at half-distance with a 10s lead.

Tan opted to stay out until the end of the 10-minute window, perhaps in hope rather than expectation of rain, but re-joined having made no impression on Warren’s advantage which increased thereafter.

At that point only a mistake by Warren, none of which have been forthcoming so far in 2021, or typical Spa downpour could rescue Andika Rama Maulana’s hopes of retaining the title. Indeed, the Indonesian had to finish in the top-two and hope other results went his way for the battle to roll on another round.

But that never really looked likely to happen, despite the Ferrari moving from fifth to third in the opening stint. And the possibility became even more remote when Ryan Duong re-took third after the pitstops.

It was an excellent performance from the Roadblock driver whose only previous points had come at the opening round.

Maulana might also have succumb to Ryan Hoolihan’s rapidly advancing McLaren before the hour was out until a connection issue left Laundry House’s 720S stranded and facing the wrong way at Raidillon on the final lap.

The Australian had earlier enjoyed a fierce scrap with Fadhli Rachmat, the only driver other than Maulana with a mathematical chance of delaying Warren’s title coronation. However, a pitstop issue ultimately accounted for JMX Phantom’s Bentley, which was running sixth before the stops.

Instead, fifth place and the final automatic qualifying spot for Suzuka’s season finale went to Zuver Revolt Racing’s Sky Lai who avoided several big accidents elsewhere to make up 15 places from where he started. It also ensured that his Lamborghini made it four different manufacturers inside the top-five.

But he wasn’t the only one to make significant progress: Kin Long Li’s Wako’s Fliptable Mercedes-AMG finished sixth after starting 18th, closely followed by Kyo Yim (Pakelo Nine’s, McLaren) who initially lined up one place further back.

But the day and championship undoubtedly belonged to Warren who will have a rare opportunity to remain unbeaten over the course of a season when Suzuka hosts the GT World Challenge Asia Esports Sprint Series finale on October 14.