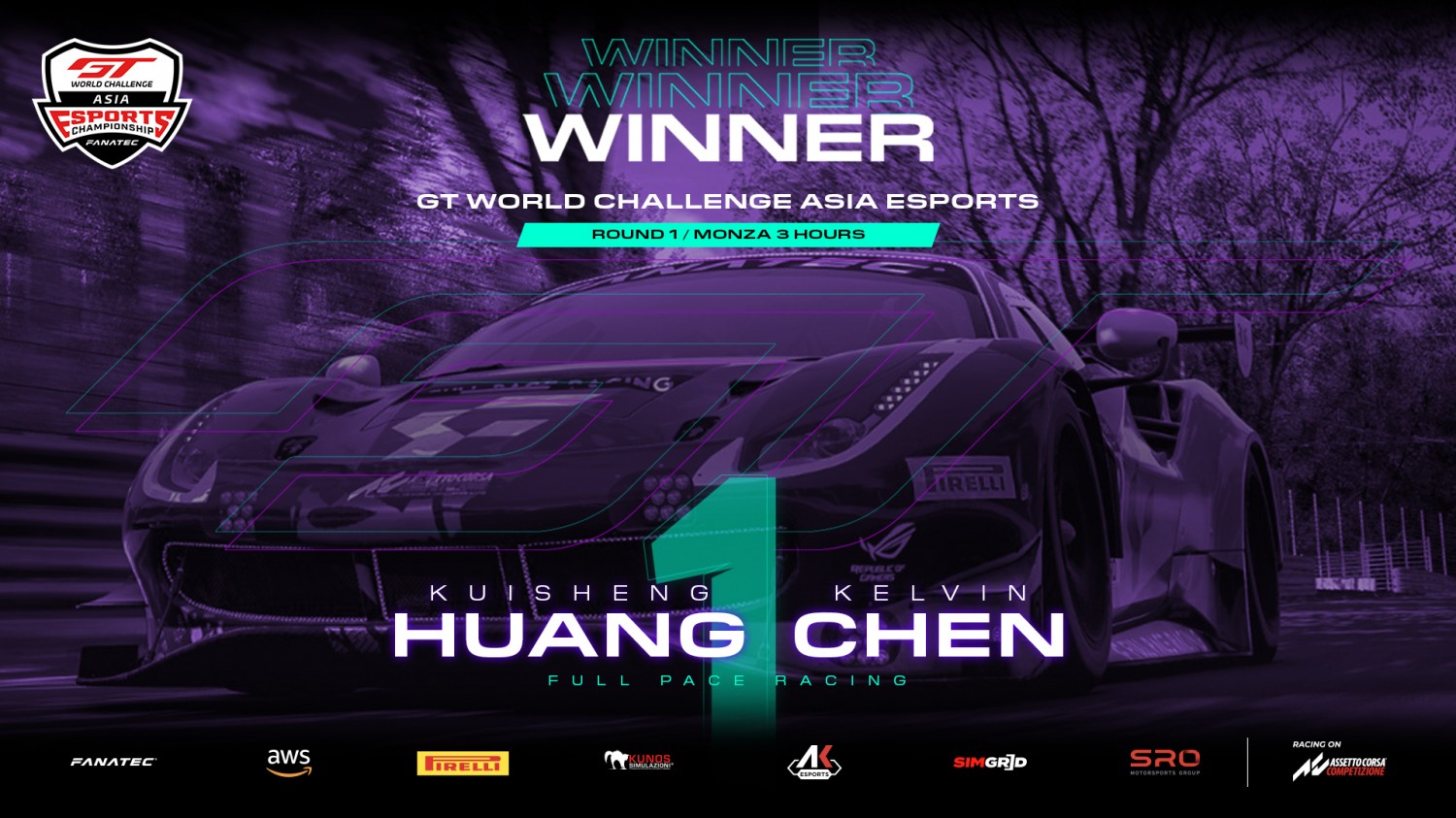 The Ferrari and pole-winning McLaren were side-by-side across the line at the start of the final lap after Rachmat slowly but surely caught Chen during the last hour. However, the long-time leader held his position into Turn 1 and rebuffed further advances before taking the chequered flag barely ahead of the 720S.

The top-two, along with fellow podium finishers Dillan Tan and Andika Rama Maulana (Legion of Racers, Mercedes-AMG), were in a race of their own throughout much of the three-hour encounter after early incidents and penalties delayed several other potential front-runners.

One of them, Wako’s Fliptable Racing’s Aston Martin, finished fourth despite ending the first 20 minutes down in 14th, while Laundry House overcame a spin, drive-through and five-second pitstop penalty to somehow take sixth.

Just ahead, The Odd Bods Honda made it as many different manufacturers inside the overall top-five.

Such were their fluctuating fortunes and speed that it wasn’t clear which of the three standout teams and cars – Full Pace Racing’s Ferrari, the McLaren of JMX Phantom, and Legion of Racers’ #889 Mercedes-AMG – would prevail until the final corner of the last lap. Indeed, each of the trio were never far from the front across the three hours.

Rachmat’s pole time, which was 0.3s faster than anyone else, initially pointed towards JMX Phantom. However, a poor getaway for his co-driver Bahar allowed second and third place starters Huang and Tan to jump ahead.

Tan wasn’t done, though, and took the lead at Variante della Roggia on lap two via a move that cost Huang momentum and ultimately dropped the Ferrari to fifth behind Bahar, Damon Woods and Kin Long Li.

However, Full Pace Racing then received a slice of luck two laps later when Woods sent Long Li spinning exiting the second Lesmo. Not that Huang waited for Woods to serve his drive-through penalty; instead, he passed the Mercedes-AMG down the inside at Turn 1 before setting up the three-way battle out front that would remain a feature of the final two hours and 20 minutes.

In truth the trio were never nose-to-tail as one. Instead, Legion of Racers’ Tan was as many as six seconds clear in the opening stint before Bahar trimmed the gap to under one second just before the first scheduled stop after an hour, while Huang was a further four seconds further back.

After pitting together, Legion of Racers’ Rama Maulana emerged with a similar advantage over Huang, who remained onboard the Ferrari. However, Bahar’s replacement, Rachmat, resumed nine seconds and one place further behind the race leader.

But changing drivers wouldn’t prove beneficial to Legion of Racers who dropped from first to third during the second hour. Indeed, it was just after half-distance that Huang muscled his way through into Parabolica before Rachmat pulled a similar move 20 minutes later at Turn 1.

Thereafter the latter was unable to make further inroads into the Ferrari’s advantage, which stood at eight seconds after the second round of stops.

But Rachmat, who remained behind the wheel, had kept something in reserve and began chipping away at the newly installed Chen’s lead. With 40 minutes left it stood at five seconds, then three as the final 20 minutes approached, and two with 10 minutes remaining. With Rama Maulana unable to give chase, the battle for victory was now a two-horse race.

Soon, there was nothing between Chen and Rachmat whose McLaren was clearly quicker than the Ferrari on low fuel and worn tyres. His best chance would come and go as the cars crossed the start/finish line for the final time, the 720S almost fully alongside the 488 but, crucially, on the outside line for Turn 1.

Rachmat continued hassling Chen throughout the final lap, darting this way and that in an effort to dislodge the leader. But Chen was having none of it and defended superbly en route to a hard-fought victory and 25 valuable points.

Maulana’s pace dropped sufficiently over the final laps to leave Legion of Racers’ Mercedes-AMG 15s behind the top-two at the chequered flag. However, he was still comfortably clear of Law Yat Lam whose Wako’s Fliptable Racing Aston Martin would surely have been a victory contender without its early off. Indeed, Long Li was perhaps the race’s standout driver over the first and second stints in which he climbed from 14th to fourth.

Sergey Mironenko and Roland Schmid enjoyed a trouble-free run from ninth on the grid to fifth in their Odd Bods Honda after several other frontrunners hit trouble. One of them, Laundry House’s Andrew Laurenson, picked up a drive-through almost before the race began after jumping the start and then compounded his error by spinning on lap one, while co-driver Philippa Boquida also collected a five-second pitstop penalty for contact. However, their pace was sufficient to round out the top-six ahead of Woods and Luis Moreno’s penalised Legion of Racers Mercedes-AMG.

JMX Juniors’ Daffa Nabiel and Syaukat Takuma showed flashes of pace in their fightback from an early incident to finish eighth, while The Academy’s Afiq Farid and Bernard Chan were the best of the Bentley crews in ninth after a late spin denied them a possible top-six finish. Geraedts Racing’s Ben Floyd and Corey Sweet completed the points scorers in 10th.

A third driver joins each crew when Asia’s Endurance Series tackles the Bathurst 6 Hours on November 13.