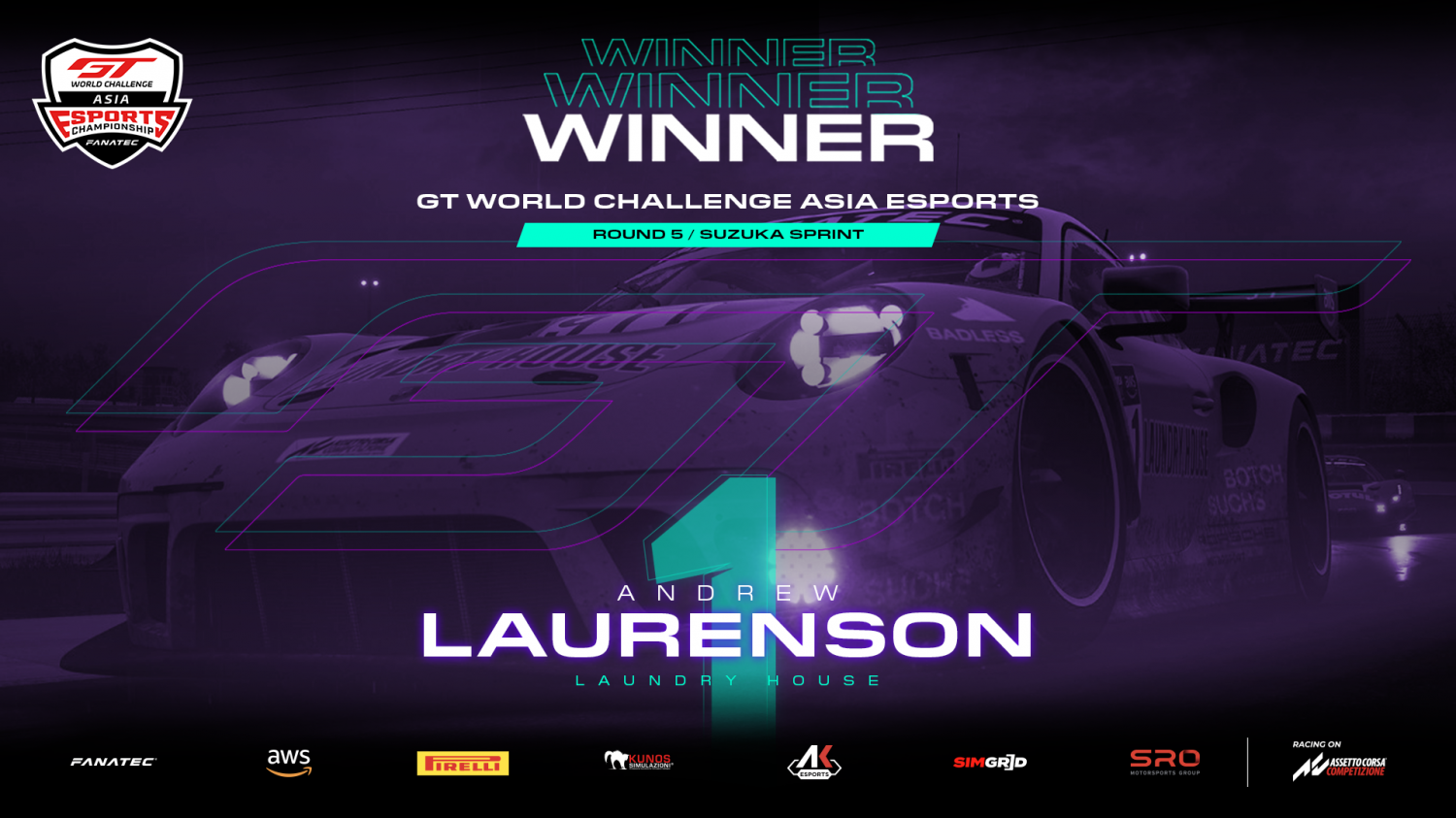 Andrew Laurenson claimed victory in the final round of this year’s GT World Challenge Asia Esports Sprint Series at Suzuka earlier this evening after withstanding race-long pressure from Dillan Tan.

Dayne Warren opted to skip the finale after wrapping up the Drivers’ title at Spa, which left the door open for someone else to finally win a race on Assetto Corsa Competizione in 2021.

And it was Laundry House’s team leader Laurenson who climbed to third in the final standings after converting pole position into a narrow victory over the Legion of Racers Ferrari and the Happy Laps Aston Martin driven by Jake Baldwin.

The first wet race of the campaign produced by far the closest contest, as well as some of the best driving of the season.

Laurenson led Tan away from pole and maintained a slender 0.3s advantage throughout the opening stint. Behind, Andika Rama Maulana managed to pass Baldwin into Turn 1 but couldn’t quite match the pace of his Legion of Racers team-mate directly ahead. Instead, he was back down to fourth by the time the pit window opened on 25 minutes after running wide at Degner 2.

That allowed Baldwin to close back in on the top-two and pit just behind Laurenson half-way through the 10-minute window. Tan remained out for another lap but emerged still fractionally behind Laundry House’s Porsche.

The trio were, if anything, now even closer but Laurenson didn’t put a foot wrong in defence of the lead despite the soggy conditions. And his skill was rewarded with three minutes remaining when Tan lost time in lapped traffic, effectively ending the contest. One second separated them at the finish.

Baldwin was also excellent en route to third but faced some late pressure from Maulana who closed back in on the podium finishers. Nevertheless, fourth place was enough to hand 2020’s champion the runner-up spot behind Warren.

Laundry House’s Mercedes-AMG ensured four different manufacturers finished inside the top-five despite Terry Rayton losing time to Maulana after the pitstops. He came home ahead of Moosa Mahsoom (Rookie Monsters, Ferrari) who passed both Nigel Chuah (Legion of Racers, Mercedes-AMG) and Philippa Boquida (Laundry House, McLaren) during the pit cycle.

Asia Esports’ Sprint Series might be over but attention now switches to the Endurance championship, which begins with the Monza 3 Hour on October 30.