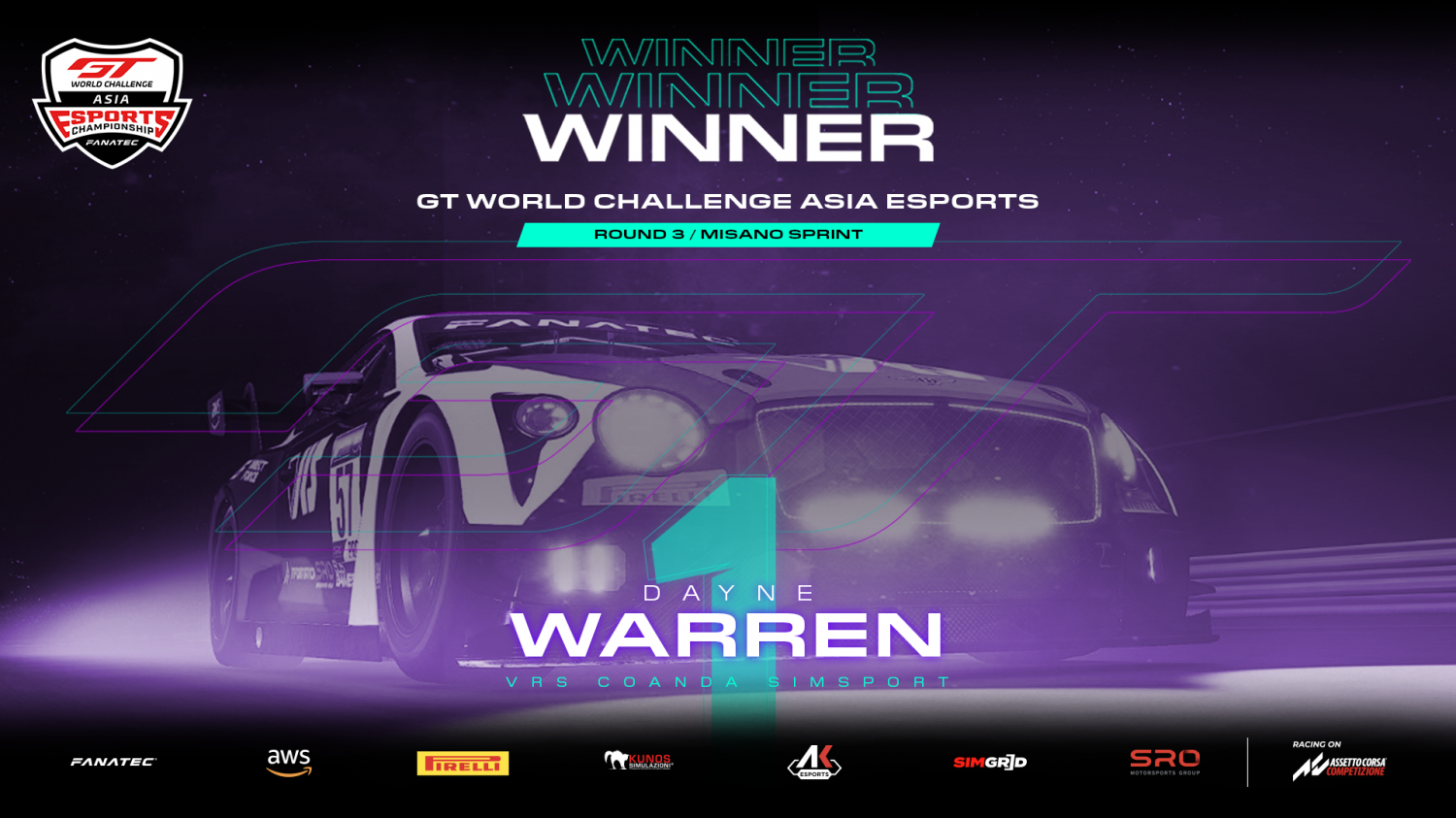 For once the Australian didn't start on pole, but he still ended lap one in the lead following a clash between front row duo Dillan Tan and Philippa Boquida, which also involved championship protagonist Fadhli Rachmat.

Warren was never troubled thereafter and ultimately took the chequered flag 16.2s ahead of Ryan Hoolihan's Laundry House McLaren, which jumped from fifth to second amidst lap one's chaos.

Reigning champion Andika Rama Maulana (Legion of Racers, Ferrari) initially limited the damage in the title battle by fighting from 10th to third. However, the Legion of Racers Ferrari dropped to seventh in the final classification following a 10s post-race penalty for causing a collision.

For the first time this year Dayne Warren didn't start from pole. But any hope that someone else might also claim a victory – or indeed fastest lap – were dashed after just two corners when Philippa Boquida tagged the rear of Dillan Tan's Ferrari. Fadhli Rachmat, who lined up fourth, was also involved in the ensuing spin before another contact ended his chances of remaining second in the standings.

Only one of the top-four starters wasn't compromised. And that, of course, was Warren who sailed around the outside of Tan’s stranded Ferrari before rebuffing Boquida for the rest of lap one. Her hopes then also faded when a mistake and subsequent drive-through penalty for the contact with Tan dropped Octane Online Racing's McLaren out of the reckoning.

Now, just like Brands Hatch and Zandvoort, the Bentley was out front on its own. With Ryan Hoolihan's attention predominantly focused on keeping Avila Bahar's Bentley at bay, Warren was free to also maintain his 100% fastest lap record en route to establishing a 11s advantage before the pitstops began.

The gap reduced to six seconds when Warren missed his marks – the only mistake in an otherwise accomplished hour of racing – but it mattered little thanks to an exemplary second stint in which he edged 16s clear.

Behind, Hoolihan weathered Bahar's storm throughout an opening stint in which Laundry House's Porsche and the JMX Phantom Bentley were rarely separated by more than a second. The latter certainly appeared the faster car but Bahar's attempt at an undercut actually resulted in him losing third place to Andika Rama Maulana who started 10th and pitted in fifth.

That podium would have kept some pressure on Warren, but a 10s post-race penalty now leaves Maulana 41 points behind with only 50 available over the remaining two rounds.

Bahar's unsuccessful attempt at re-passing the Legion of Racers Ferrari also helped Andrew Laurenson to briefly nip past, but it was the subsequent reversal of positions that set up one of the season's best moments.

The same move saw Laurenson shuffled from fourth to sixth, but the Laundry House driver faught back by continuing to hustle Sky Lai who'd also picked up places during the pit window. The Porsche made several unsuccessful lunges before finally re-taking fifth after running side-by-side with Zuver Revolt Racing's Lamborghini through eight corners!

Axle Sports’ Naquib Azlan was also impressive during his charge up the order after starting 19th but collected a penalty that dropped him from sixth to 13th post-race.

Next up it’s Suzuka, which hosts the first of Asia’s three Endurance Series rounds on September 18. 2021’s fourth Sprint race, at Spa-Francorchamps, then follows less than a week later (September 23).